The orangery in Barnet is complete, although only partly furnished. It appears to have been annexed by one of the younger members of the family and their new territory reclassified as a playroom.

The orginal CAD design is here, the final result looks exactly as intended and really fits in well with the existing extensions. 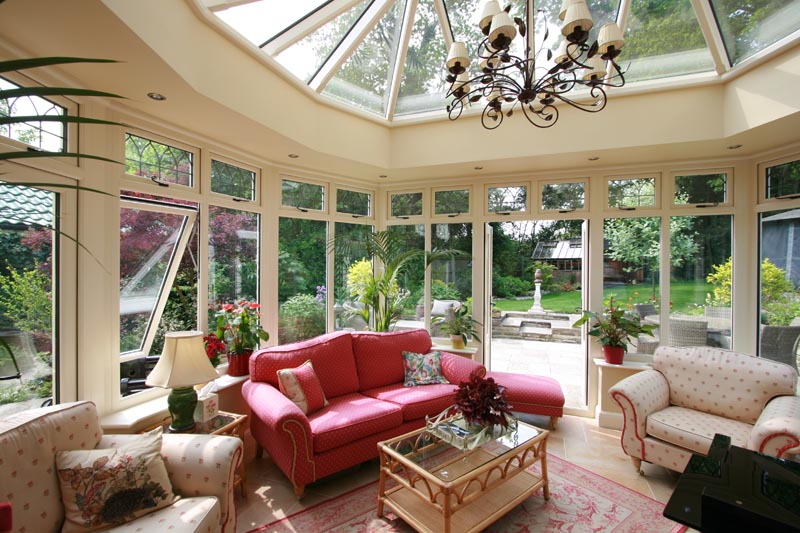 The orangery is now completed and furnished.

The clients have chosen a tasteful chandelier which ties in with the black ironmongery used on the windows and doors. The furniture is relaxed, yet smart the colours subtly co-rdinate with the decor of the room. 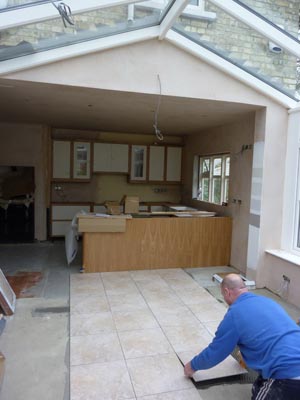 The kitchen company have installed the units, we are now back on site to tile the floor and finish off. It is generally far better to tile the floor after the kitchen has been installed, most kitchen firms and tilers agree with this, however there are the occasional awkward ones who think otherwise!

There are various arguments for fitting either the floor or the kitchen units first and sometimes it can depend on the situation. The main arguments in favour of tiling the floor after the kitchen untis have been installed are given below:-

1) Pattern – You can set the tiles out to suit the kitchen layout – as can be seen in the photo above. This is particularly important with larger tiles.

2) Aesthetics – If the tiles have an uneven surface, it is better to cut the tiles up to units and end panels rather than fit the panels on top, which may result in gaps.

3) Logistics and timing – The floor screed needs to dry for several weeks before the tiles can be laid. This is an ideal window of opportunity to get the new kitchen units installed.

4) Convenience – If tiling first, the old kitchen would need to be stripped out before the tiles can be laid. This unnecessarily increases the period of time the client is without a working kitchen.

5) Economy – it is a waste of time and money to put good tiles under kitchen units. It’s not just the cost of the tiles, but the adhesive, grout and labour.

6) Underfloor heating – Obviously underfloor heating should not be installed under kitchen units. Whilst it is possible to lay the heating using a plan to avoid the kitchen cabinets and appliances, it is better to install it after the kitchen is fitted and directly below the tiles.

The old kitchen has been stripped out and the plastering is underway.

In most cases we would leave the existing kitchen operational, the kitchen fitters would remove the old and fit the new in one process. However, in this case there was a bit of work to do in making good the old floor, altering a lot of plumbing and electrics, so the clients were happy to dine out for a few days.

Our team will be working over the weekend to complete the plastering, lay the warm-water underfloor heating and screed the floor. The kitchen fitters are due to arrive on Monday, so all being well the client’s will be back to healthy eating by the end of the week! 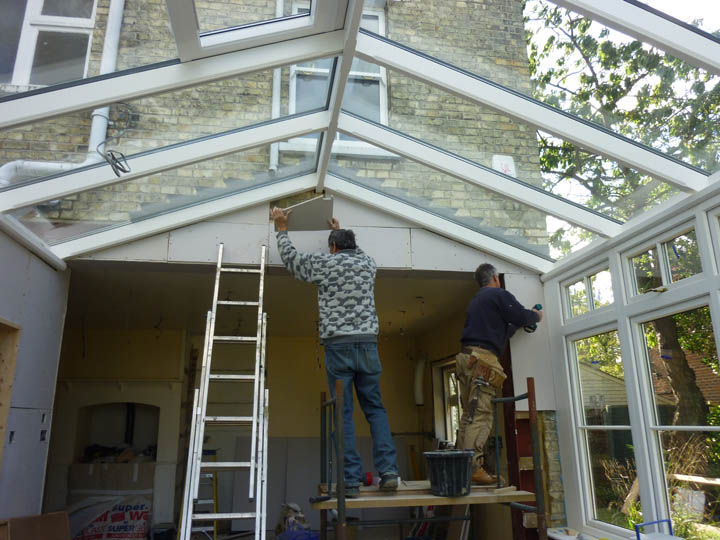 The guys are just fitting the final bits of plasterboard around the steel. Vic is sporting his finest Christmas jumper 😉

There is still quite a bit of extra work for us to do in the kitchen to get it ready for the new kitchen being fitted next week.  We’ve had to take up the old floor tiles and repair some damaged floorboards, re-route the hot and cold feed and alter the gas supply.

We’ve also removed all the old units, we now have to fit some 18mm plyboards down over the old floor boards to strengthen it for the floor tiling. The floor tiling will be done after the kitchen is fitted; the preferred method for most kitchen companies, tilers and ourselves.