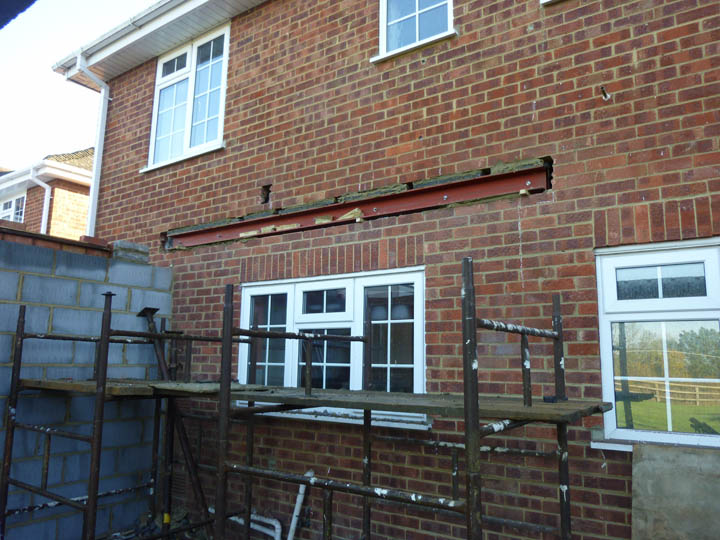 The steel is now in place ready for the new opening to the kitchen. The hole has been neatly cut and we can leave the rest of the brickwork and window in place until the orangery roof is built and the new structure is secure and watertight.

We need to insert the RSJ’s before the orangery roof is built so they can be placed in to the ceiling void. This means that once the job is complete, the ceiling from the kitchen will run flush into the new orangery. We will need to construct padstones under the end bearings of the steels, but we will do this when the brickwork is removed so that we can close the open cavity and form solid piers.

There are in fact two parallel beams bolted together; the inner beam supports the inner leaf of blockwork, the beam that you can see in the photo supports the outer brickwork. There are spacers between the beams that are specifically cut to suit the width of the existing cavity (75mm in this case) and welded to the beams. This type of connection helps spread the load between the two steel beams.

We will typically use this double-steel arrangement for a cavity wall partly because it’s easier to lift two smaller beams than one large one, but mainly so that the beams can be sited directly under each leaf of masonry, rather than centred between them.

We designed this orangery to have slim masonry piers. Brickwork is very strong in compression but narrow brick panels have little lateral strength and have to be strengthened by additional steel work. There were several possible solutions, from steel wind-posts to ring-beams or posts bolted to the footings, but in consultation with our structural engineer, we opted to for a steel “picture frame” around the two outer apertures.

These frames are four sections of RSJ bolted or welded together to form a rectangle that essentially gives the opening the same structural properties as if it were solid brickwork. These were welded on-site to Catnic type cavity lintels which provide a thermal break to the outside.

You can see Phil carefully pointing up the narrow piers, these won’t have much strength until everything is connected together. The fact he is such a neat and tidy bricklayer just about makes it bearable to employ a Man United fan 😉

The main RSJ’s and props are in the garden, ready to be inserted into the house wall next week. We will put these in place, but leave the existing kitchen window and surrounding wall in-situ until the orangery roof is built and the new structure is secure and watertight.

We did debate whether to push the central section of the orangery out by a few hundred mm, but the client opted for a flush frontage. The overall projection is restricted by the garage.