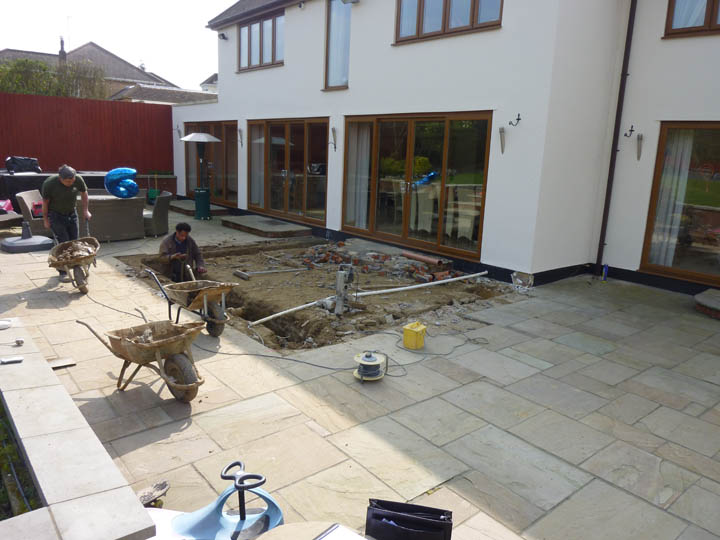 There’s plenty of space to get a reasonable size excavator in this job, however the clients has a relatively new patio which would get damaged. Therefore we have to dig the footings by hand.

The ground is clay, which isn’t too hard to dig, although it can be a bit messy, particularly if it rains. The foundations will be one metre deep, assuming this is approved by the building inspector. Often in clay we have to put deeper foundations in, but there are no trees nearby, so one metre should be sufficient.

We need to get his job done completed for a garden party in June, it should be ok, but with building work, the British weather and delivery companies, you can never be too sure!

This orangery will have a contemporary feel and incorporate large floor to ceiling windows and folding-sliding doors.

Rather than use the same woodgrain effect uPVC windows that are on the main house, the clients have chosen to make the orangery a feature in its own right and opted to go for hardwood frames that will be painted a subtle Farrow and Ball colour.

The sloping house roofs on two sides present a slight technical challenge. An orangery roof would have been easier in some respects, but the clients specifically wanted a conservatory to allow as much light as possible into the adjoining rooms. The will require a box-gutter on two sides.

The size of the conservatory is fixed by the two existing walls, although it would be possible to project beyond the rear building line of the house, the clients do not want to do so.